Zach Brittle, a 2001 MA in Counseling graduate of The Seattle School and a Certified Gottman Therapist with more than 10 years of experience working with couples, has recently published a new book—The Relationship Alphabet: A Practical Guide to Better Connection for Couples. We’re thrilled to offer the following excerpt from the book, which you can read more about here.

I fully intended this chapter to be about Integrity. The word gets thrown around a lot in conversations about good behavior, but I feel like that’s too preachy. Instead, I prefer to think of integrity the same way architects do: to mean whole, undivided, and sound in construction.

This would have been an easy direction to take, given that the Gottman Method features its own architectural metaphor in the “Sound Relationship House” (SRH). The SRH derives its integrity from the twin pillars of trust and commitment. Without these, Dr. Gottman suggests, his “Seven Principles for Making Marriage Work” won’t work. I would have argued that it’s just as important for you to have personal integrity—a sound internal construction—as it is to have relationship integrity. But that started to sound too preachy. 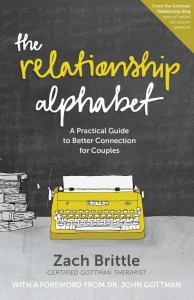 So I turned my attention toward Intent. I love intent! Intentionality is essential to a healthy relationship because it proves that you aren’t interested in settling for the status quo—you’re willing to work for greater intimacy and friendship. When intentionality fades, couples drift into that “ships in the night” stage. So when couples tell me they feel more like roommates than lovers (and I hear that often) I tell them to do something together. Anything. It doesn’t have to be therapy, but it helps. Maybe just pick up the Seven Principles book and try a few of the exercises. It doesn’t have to be a standing date night, but that helps. You could simply learn a new board game together. Commit to Spaghetti Sunday or Wine Wednesday or “Monday is Funday.” Pick a show to binge watch together. It almost doesn’t matter what you do, just do it on purpose.

Thing is, that’s about all I have to say. I don’t need 750 words to talk about Intent. So, I considered writing about Infidelity, but then I’d need a lot more than 750 words. Intercourse. That’s a stretch. Individuation. Snore. Ignorance. It’s bliss. Check. In-laws. Another time. Ultimately, I was stuck for the right word heading into a family vacation to Disney World.

And then it hit me. Have you ever considered the power of Imagination?

Walt Disney did. And he discovered that power was limitless. The Disney parks are a testament to the idea that there is no such thing as no such thing. Talking mouse? Sure. Sleeping Beauty’s castle in southern California? Why not? Build a Walt Disney World in central Florida? You bet! Entire theses have been written about the Disney philosophy and business model, but I won’t attempt to explore those here. I’ll just say that wandering around Walt Disney World, I was constantly in awe of the power of imagination. Often enough it was some detail or presentation at the parks themselves. Just as often it was the astonishment on my daughter’s face or the laughter in her voice. For just a few days we forgot that we were real people living in a real world. We were Treasured Guests at the Happiest Place on Earth.

I am, of course, a champion of trust and commitment in a marriage, and I believe they are critical to the integrity of a Sound Relationship House. That said, I think at least two other pillars are required. The first is Hope, which I won’t expand here except to say that a couple with even a grain of hope has a chance. The other is Imagination.

I believe, as Dr. Gottman suggests, that marriage is a creative endeavor. Whenever two people come together in a relationship, they are creating a brand new culture. Genesis, the first book of the Bible, says that in a marriage, two become one. That process certainly requires some creative math. The top floor of the SRH invites couples to create shared meaning. And all creative endeavors require imagination.

In a marriage, imagination is a willingness to believe that your relationship can be different from your parents’, your friends’, or even from your own relationship six years ago. Or six months ago. For engaged couples, it’s the active dreaming about what their relationship will become on the other side of the altar. For couples in distress, it’s a chosen conviction (or, Hope) that the relationship can be better than it ever was. For you, it might simply be “Monday is Funday.”

In any case, you have to be willing to expand your thinking and to risk believing there is no such thing as no such thing. Your marriage can have integrity and intention through trust, commitment, hope, and imagination. Start today by planning that one thing you never thought you could, or would. Find a therapist. Go to a Magic Kingdom. Do something. Anything. Imagine the possibilities.